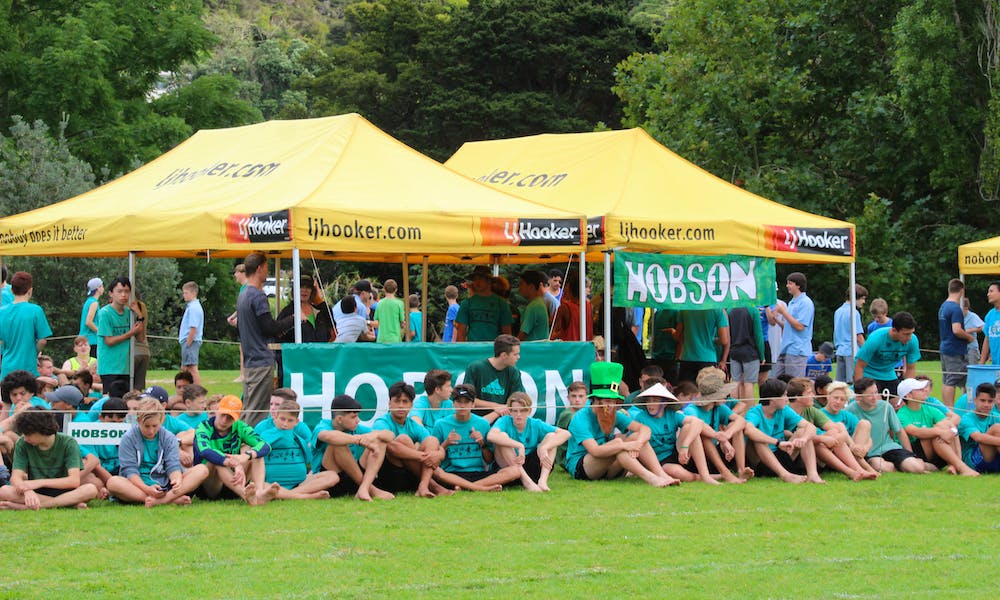 Entering the school for the first time in 2017, I had no idea of the significance of the green shirt for Hobson whanau. I’d participated in inter-house events at intermediate school, but that was nowhere near as large or as significant as the inter-whānau competition at Whangārei Boys’ High School that has gone on for decades.

I soon learned what it meant to be a part of Hobson. It meant teamwork, sticking together, participating in everything, and generally always placing third. I never expected to become whanau captain and wear the green badge, but now that the year is almost over, I can say it has been an honour and an all-round fun experience. – Ben Murray

Like most other whānau captains, I had always wanted to be a whānau captain in my final year of high school. As a junior I was shy and hated public speaking and marvelled at how those whānau captains had the courage to stand up in front of masses of people. My role as captain of 1st XV but more importantly my role as Hobson Whānau Captain has developed my confidence and I’m grateful that I have been given the opportunity this year.

I have thoroughly enjoyed leading the ‘green machine’ with Ben and wearing green with him and my fellow Hobson brothers. – Adyn Jones

Every whānau captain says to themselves, “this is gonna be the year.” Knowing full well that last year’s whānau captains hadn’t managed a victory, nor had any in the 27 years prior, we claimed: “we’ll make light work of this”. Lots of participation, some good planning, and we’ll coast through to the win.

That went off the rails almost immediately. Not for lack of effort, Hobson placed dead last in both swimming sports and athletics day, in the first month of the 2021 school year. Apparently, it takes more than decorative green outfits to get the win. Our participation was excellent; always has been in the green whānau. Alas, other whānau just seemed to have better success in terms of actually winning races.

In team sports such as touch rugby and football, we had more success, placing first and second in these competitions respectively. Other events such as badminton, basketball and creative challenges saw us move our way up to third on the overall scoreboard by term three. Now we are heading into term 4 on 37.5 points, just 3.5 points behind Grey, and 4 points behind Bledisloe, who have held the lead all year.

Still to come this year we have the haka (sadly the volleyball was cancelled due to Covid-19) as well as academic points and values awards. Traditionally, Hobson has always finished high in these competitions and we are looking to do so again this year, hoping to find our second wind. Unfortunately, speeches were cancelled this year which we would have placed highly in.

We think Hobson’s leadership shows the quality of student this whānau regularly produces. This year, Hobson has produced a Head and Deputy Head Boy in Leo Palmer and Hugo Davidson, as well as the 1st XV and 1st XI captains in Adyn Jones and Ben Murray. Hobson also has Ben Woodgates as the student rep on the Board of Trustees.

Regardless of how things turn out and where we end up finishing, it has been a real honour being a part of the ‘green machine’. We wouldn’t have asked to lead anyone else into the fray. The boys have been eager and excited to participate in events; they were always polite and respectful of our leadership, even when we clearly had no idea what we were doing back on day one.

We’d like to thank our Hobson prefects for standing with us and always helping out at inter- whānau events. Leo Palmer, Joe Trigg, Mitchell O’Brien, Dean Ramita McDonald, Josh Dawson, Ben Crowley, Ross Wilson, and Glyn Fleming-Bone. We would especially like to thank Hugo Davidson, our Deputy Head Boy who spent a good chunk of his time acting as a third Whānau Captain to help us in organising events, especially on swimming sports and athletics day.

We have enjoyed the year thoroughly, appreciated it immensely, and we are excited to see who comes after us to continue the Hobson legacy. Best of luck to next year’s Whānau Captains.