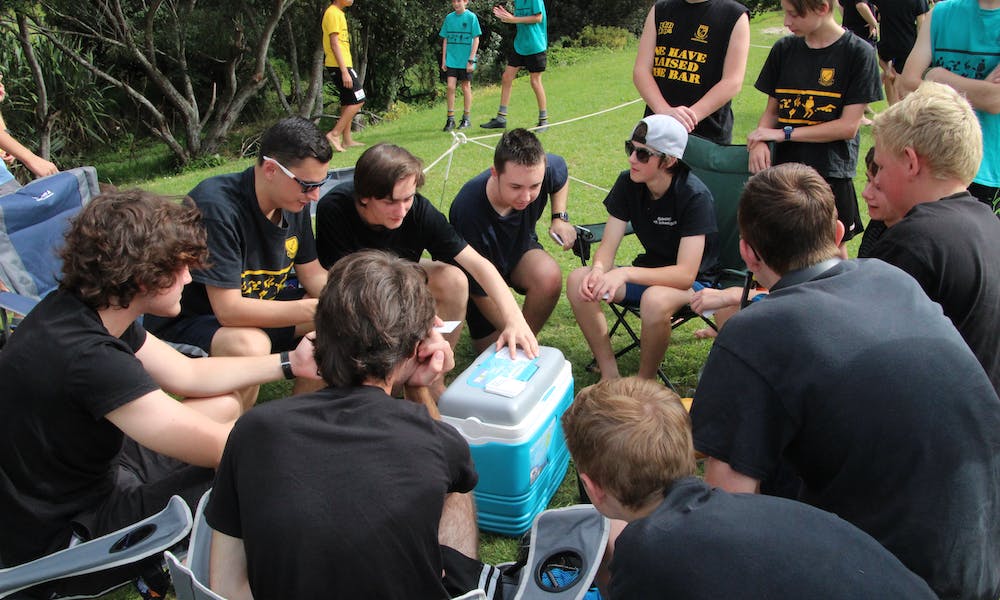 This year, being the Carruth Whanau Captains has been a privilege and an honour. Coming into this position, we both knew we had some work to do to get us back to the opposite side of the table from where we had finished the last couple of years. Back to the top where we belong. However, as the year went on, we spun further and further downhill. To fulfil fifth place again. Although we were not successful in this endeavour, we have thoroughly enjoyed the challenges and leadership opportunities we have experienced as Carruth Whanau Captains.

During our time at Whāngarei Boys’ High School, the first event of the Inter-Whanau Competition has always been Swimming Sports. This event, along with Athletics, is vital in getting as many people as possible involved to start the year off on the right foot. With the day divided into competitive and non-competitive races, everyone has at least one race they can look forward to. Despite our best efforts, Swimming Sports this year was not our strong point as we finished dead last. This is not the start we had hoped for.

Athletics is next up on the list. Throughout our time here, Athletics has always been a competitive event due to the number of events on offer and the natural competitiveness of the boys. Carruth has successfully strived in Athletics for the past five years. The strong participation and camaraderie from the boys in our Whanau saw us finish near the top of the table, in second place.

Preceding Athletics for this year’s inter-whanau competition was junior basketball. Basketball has never been Carruth’s strong point, but that didn’t stop us from giving it our all. Unfortunately, the ball didn’t bounce in our favour and we ended up keeping the streak alive of finishing in last place.

Due to the unfortunate and unforeseen circumstances of Covid-19, Workday and Cross Country were sadly cancelled. At this point in the year, Carruth was sitting on 10 points in a tie with Hobson for fourth place. This was certainly not what we had envisioned coming into the year.

A highly anticipated inter-whanau event is the haka competition. This is Carruth’s best event and one in which we thrive at, year in and year out. There have been multiple people who contributed to the success of this year’s haka. We would like to give a massive thanks to Peter and his peers who worked alongside him to bring out the spirit of Carruth, which resulted in a well-deserved first place victory and quite possibly the best haka performance the rest of the school has ever seen by Carruth.

The last few events to conclude the competition this year were speeches, volleyball and football. We would both rather not talk about these as the humiliation of coming last will only be rubbed in even further upon talking about these events. We are pretty sure everyone can guess where we finished for these events.

On a more positive note, working alongside the other whanau captains has been an enjoyable experience. We would like to thank the other Carruth prefects: Campbell Budd, Jamie Schicker, Jordyn Hetaraka, Levi Popata, Luke Botha and Sean Alexander for their ongoing support this past year. Even though we placed dead last, our experience as Whanau Captains has been an enjoyable and fun time. However, it is one that we would both rather forget about in the coming years.

As for next year’s Carruth Whanau Captain, there’s only one way to go – up. We wish you good luck on the task you are going to embark on where you will hopefully do a better job than we have done this year. Have fun, spark enthusiasm and go bring the shield home.